You are here: Home / General / The Police – Twickenham

Am gonna have to break tradition and swear,
It was bloody brilliant. 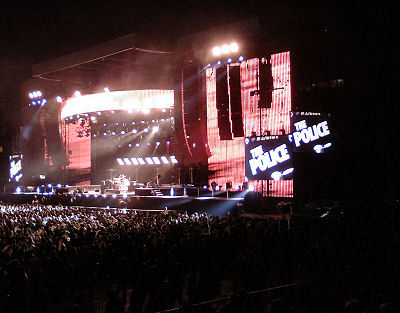 The guys looked like they had great fun,
Stewart proved he is still one of the best drummers in the world,
Andy played guitar,superbly,like a man possesed
and Sting?,well Sting just looked comfortable ,sounded great
and caressed the audience like a loving toy.

All the hits were belted out to near perfection ,
some were slowed down,some were speeded up,
but the mix was fantastic and the evening turned into a huge sing song
with fans,young and old,dancing on seats,in the aisles,with each other,
with strangers,even with security staff,such was the party atmosphere.

And then 2 hours later it was over
the last word of the night was provided by Stewart,
he took the mike after the final bow and shouted
“this is is my town!!!! ” …… “I’m American but this is still my town!!”

There are gonna be reviews saying that they were dull and boring
i say maybe these reviewers should have taken a straw poll at the exit
of some of the 50,000 plus fans who came to have a good time
and were sent home after having a great time.

London is never gonna be my favourite place to watch a concert,
you always have a sense of being ripped off down there,
but twickenham is a great venue and The Police rocked the place.

Overall was this worth a 23 year wait, you bet your ass it was.