Cristiano Ronaldo scored twice in the first-half to help United cruise to victory
over a poor West Ham at Old Trafford.

United raced into a 13th-minute lead when Nani cut the ball back for Ronaldo
to slot into the corner.
Followed by some Berbatov magic that saw him skip past James Collins,
allowing him to square for Ronaldo to tap in.

United created chance after chance as Nani fired just wide
and Anderson failed to register his first goal for the club
when presented with an easy opportunity.

Manchester United assistant manager Mike Phelan:
“We felt we should have attacked the game more and gone for more goals.
We weren’t as comfortable as we should have been in the second half.

“Berbatov showed his credentials and that piece of skill
was the highlight of the game.

“We need to keep the run going and the players realise that goal [difference]
could be important at the end of the season.”

I still don’t think we have seen the best from United yet
but they are working hard and digging in when it matters. 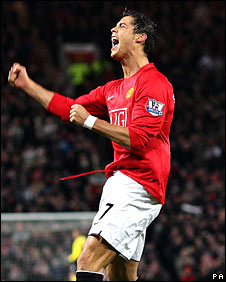