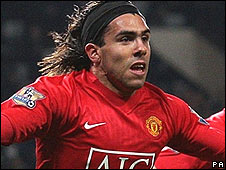 Tevez headed in from close-range and then set up Nani to fire home, before Benni McCarthy’s shot pulled one back.

Tevez struck next from the spot after he was fouled by Martin Olsson, before tapping in another to seal his treble.

McCarthy set up Matt Derbyshire to slot in and McCarthy struck himself from four yards out, before Tevez hammered in a cracker to seal it in injury time.