United dominated the first half and deservedly took the lead
when Darren Fletcher ran onto Ryan Giggs’ pass
to slot home after 22 minutes. 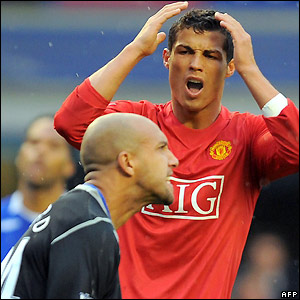 Everton were in serious danger of being totally over-run,
and keeper Howard was their saviour shortly after with three vital saves in the space of a minute.

Moyes’ side needed to do something
to at least to gain a foothold in the game,
and they understandably adopted a more physical approach at the start of the second half.

Everton’s renewed tactics paid off when Fellaini drew them level after 63 minutes.

Neville lofted a cross into area and the Belgian, who had troubled United with his aerial prowess, rose to beat Van der Sar with a downward header.

United boss Sir Alex Ferguson will see this as two points dropped after they dictated the first half – but his side became unsettled by Everton’s highly-combative approach in the second period.