You are here: Home / Football / Ban the Vuvuzela 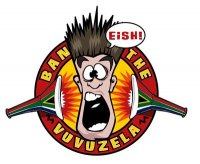 A growing number of Premier League clubs are following Tottenham’s lead
and banning vuvuzelas from their grounds on match days this season.

But Blackpool, Chelsea and Manchester City –
while not wanting to encourage fans to use vuvuzelas at their grounds –
said they have no plans to ban them.

Some Football League clubs have also banned the horns,
following their widespread use during the World Cup in South Africa.

Some retailers across Britain have being selling vuvuzelas in anticipation of their popularity.

However, the horns have been heavily criticised by players and fans alike
with many suggesting they are tuneless and block out singing and chanting.